Already did one of these concerning funerals . . . might as well do one on weddings as well, right? They’re basically the same thing anyway, so. (Fnar fnar fnar!) 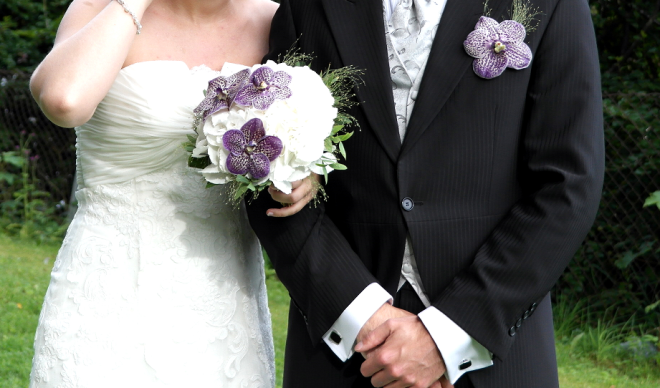 Well, the focus is going to be a little different, because I’m not taking about faith or religion this time, I’m talking about people. And we all know how I feel about those, right? I’m not extremely well versed when it comes to weddings. I’ve arranged (and participated in) my own, and I’ve been the best man at one, but apart from that I don’t have much experience with them. What I do know, is that my own was pretty far removed from others I’ve been to or heard about. The main difference seemed to be that others kept following so many rules! Rules for guests, rules for the ceremony, rules for everything! And not even their rules, or biblical rules or whatever, but other people’s rules!

Just to get this out of the way: We did not have an ‘extreme’ wedding of any kind. It wasn’t Star Wars themed, we’re not members of a cult and we didn’t serve hot-dogs and say yes in the back of a truck. It was a normal, beautiful outdoor ceremony, she wore white, I wore black, we both said yes and so forth.

So, if our wedding was so ‘normal’, how come I’m making such a big fuss? Because we were subjected to those same rules, we just chose to ignore them! Which brings me to the meat and bones of this post. I’m not criticizing anyone getting married here! The weddings I’ve been to have all been beautiful, and their hosts are still happily married to the best of my knowledge. My beef here is with everyone not getting married still involving themselves in the ceremony. (Mostly the parents, in my experience) Call me old fashioned, but I think a wedding should focus mainly on the two people actually getting married. We can all agree to that, right? The main event is Mr. and Mrs. Doe choosing to spend the rest of their lives together, and inviting friends and family to a lovely gathering so they can briefly shove their happiness in everyone’s faces. As a guest, my job is to let that joy and happiness wash over me, no matter how I feel on the inside, because it’s their special day! And this is the point I fear so many soon-to-be-weds out there miss: It really is your day, and not anyone else’s. The ‘shoving of happiness down the throat’ is strongly worded, but on this one day, you’re perfectly entitled to!
So why on earth do parents and siblings and even over-extended, far away family get so much power over weddings? I’ve known people who dreaded their own weddings because they’d invited so many people. Some people meet extended family members and whatnot for the first time at their wedding. Strangers, basically, eating food and getting drunk at the ceremony you’ve spent months planning! Some of you might argue that ‘it’s all about family’, but is it really, though? If anything, it’s about your new family – not your third fucking cousin on your mother’s side that you met that one time five years ago. Of course, if you want to have 70 or 80, or a 110 or 220 people there, be my guest. But don’t you dare do it just because someone else expects you to! It’s supposed to be the happiest day of your life! (Yes, yours too, men! Stand up for yourselves!) I guarantee you it won’t be if you’re running around like an idiot, trying to keep 200 people happy. Some families rip completely at the seams due to weddings. All because one angry fucker is excluded from the guest list, or because the bride or groom’s mother is barred from micromanaging the whole thing. People are going to claim some sort of ownership to it because you share the same blood, or they’re going to refer to someone else’s wedding, or quote some bizarre rule about tradition and whatnot.

In short: people will go to ridiculous lengths to stick their noses in your wedding, and they don’t get to!

I think a lot of this is rooted in tradition, just as funerals and confirmations. We’re supposed to have the entire family surrounding us. We’re supposed to let our drunken, creepy uncles give some sort of speech about a groom they hardly know. Because ‘family’ right? Well guess what? You make your own family! Hell, if you’re planning a wedding, you’ve already made your own family! That beautiful man or woman standing beside you in sickness and in health; that’s the only one who’s opinion matters! Not your mother’s, not you uncle’s and certainly not some estranged cousin’s. I’ll say it again. This is your great day, and you can do whatever you want with it!
Before you all start throwing rocks at me here . . . I’m not telling you to ignore your family. If you want a big wedding, go for it! If your family, extended or not, have good ideas, roll with it! I’m just saying don’t be dictated! I’m writing this because I know of people who’s families have started ripping shit up because of guest lists and step-parents and decorations and religious beliefs and whatever the hell else. I’m writing  this because it makes me fucking angry that people have their special day ruined by egotistical bastards! I’m writing this to let you know you always have a choice. And on this particular day – and any particular day, I’d say – you decide! Don’t look back on your wedding years later and realize it would’ve been a thousand times better if you haven’t buckled under the pressure. Not everyone has a perfect family. Weddings usually don’t turn out the way they do on TV (both good and bad, I suppose), but it can be all you’ve ever wanted.
You just need to know what that is, and then stick with it!
Sincerely, Bishop.
Who don’t need no woman to boss me ’round, but married one anyway.
(I love you honey!)